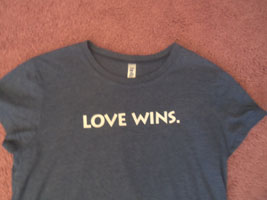 Very aware that I’m neither young nor beautiful enough to turn heads, I was puzzled the first time I dashed into my local grocery store without changing from my jeans and top—and noted some men glancing my way a second time. What’s going on—do I look that bad? I asked myself.

Then I realized they were looking at the words on the front of my tee shirt which proclaims simply “Love Wins.” Noting their puzzled brows, I could imagine them mentally asking “Does love win? Is good really stronger than evil?” A question our troubled world asks daily.

Current news reveals widespread evil so disturbing that even the strongest heart experiences a discouragement attack. Recently I overheard someone exclaim sadly, “The world is going to hell in a handbasket!”

Evil seems to be growing exponentially—at home and abroad. The moral fiber of our nation appears to be unraveling before our eyes. Abroad, Islamic terrorists fanatically follow a version of religion that fosters hate and senseless killing. Loudly proclaiming their goal to rid the world of infidels, they seek to destroy not only their own people who refuse to embrace their distorted diabolical views, but in particular those of us who believe in the Judeo-Christian God.  The loving all-powerful God who commands and encourages his followers to love their enemies and pray for them—not torture and kill them.

The living God who lovingly created everything and holds our world, the universe and all the galaxies in balance.

A God who, by creating mankind—you, me, us— in His own image, endowed us with a powerful gift that only he and we have. The gift of choice. Commonly called “Free will.”

This was risky on God’s part, wasn’t it? Why? Because we might choose to do evil and not good. But God didn’t want robots which would have been less complicated to create—and less troublesome. He wanted someone to lovingly interact with and reflect his goodness and glory. While we are all brothers and sisters through creation, developing a spiritual bond with God is a personal choice. Therein lies the risk.

Who among us hasn’t failed our creator dismally by trying to fill the God-shaped vacuum in our souls with things not honorable to God? Islamic terrorists, however, choose to abuse this incredible gift by deliberately spreading evil. They utilize fear through wanton destruction to advertise their hopes of conquering the world.

Recently I received a call from a young woman plagued by nightmares. In her dreams, she nightly endured capture and threatened beheading by ISIS for her Christian faith. “What if they come over here?” she asked, voice trembling. “Why isn’t God doing something? I thought good was supposed to be greater than evil—yet evil seems to be winning.”

“God has already done something,” I said gently. “And the good news is: Good has already won—it overcame evil over two thousand years ago!

“When Jesus yielded himself to the cross with all of its disgrace and agony, it wasn’t because he was a weak and helpless victim. He was a mighty love warrior who, although he could have called down legions of angels to rescue him and destroy those nailing him to the cross, he chose to remain there and accomplish what he came to do. Save mankind—through love.”

“Well,” she interrupted, “That’s in the past. The terrorists seem to be winning now—in the present!”

“Remember,” I interjected, “The fact that God is love also means he is a God of justice. You can’t have one without the other. So, we can trust in God’s love because he is the final judge of evil.

And do not fear those who kill the body but cannot kill the soul. Rather fear him who can destroy both soul and body in hell.   -Matthew 10:28-29 (ESV)

“We need to pray for our enemies because they are but tiny, temporary men with limited power who only think they are in control. One sad day they will kneel before God and face a frightening eternal future if they do not change.

“As a nation,” I continued, “We must help protect the innocent, rescue the helpless, deal with the enemy swiftly and firmly, and execute justice to the best of our ability. And as individual Christ followers we are to bear evidence that love is stronger than evil by praying for the enemy— sincerely longing for them to be freed from the lies of Satan, Commander of Evil and arch enemy of God.”

I reminded her of what Scripture says about those claiming to do evil in God’s name.

Whoever claims to love God yet hates a brother or sister is a liar. For whoever does not love their brother and sister, whom they have seen, cannot love God, whom they have not seen. – 1 John 4:20 (NIV)

After finishing our conversation, I feared that her head may have understood, but not her heart.

Consider this. Which takes greater strength . . . to drive nails into the hands and feet of a man to a rough wooden cross, insult and ridicule him as you pierce his side with a sword, or to allow this injustice done to you—knowing you have supernatural power to stop everything in an instant? Yet you choose to remain where you are—for a greater purpose.

As you are dying, which would be harder: to scream out curses for vengeance, demanding God vaporize your murderers, or beg him to forgive them because they don’t understand the significance of their actions?

The End of the Story or the Beginning?

But the story doesn’t end with Jesus’ death on the cross. Not with God who loves surprise endings!  Death, lacking the power to destroy Love, was defeated when Christ arose three days later from the grave. And Scripture tells us that the next time Christ, the King of kings and Lord of lords returns, he will not be riding a meek donkey, but a white stallion.

What greater proof do we need that love indeed wins?

I was surprised a week later when this same young woman called me with a different story. No more nightmares. She announced that in addition to praying for their victims, she was now praying for the terrorists— her brothers in humanity. She imagined looking into their empty eyes, blinded by hate, and reminded herself that when Jesus died on the Cross it was also for them. She then quoted 2 Peter 3:9. (KJB)

The Lord . . . is longsuffering to us-ward, not willing that any should perish, but that all should come to repentance.

Interesting, isn’t it? It requires more energy to fear and hate than to love—yet love is stronger.

I think I’ll keep on wearing my shirt (but not to church this Easter Sunday. More importantly, may my shirt’s words be burned into my heart so that love may be seen in me regardless of what I wear.