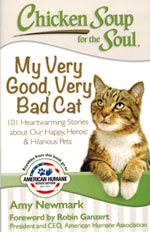 Publisher: Chicken Soup for the Soul

Fun fact: Cats do respond to training! In fact one of the first scientific studies highlighting the importance of reinforcement in animal behavior was done with cats.

“Smokey, whatever it is you want will have to wait—I’ve got to put these groceries away before the ice cream melts!” But Smokey continued yowling. Knowing I’d have no peace until I investigated his concerns, I quickly stashed the last of the frozen foods into the freezer, pushed the other groceries to the side on the counter, and rushed toward the front entryway where Smokey stood at attention at the foot of the stairs.

Viewing the chaotic scene, I laughed and said “This is your emergency? Don’t you think I would have discovered this when I walked upstairs?” Before returning to the kitchen I added, “And, don’t be such a tattle-tale!”

Single, our North American Short-haired black-and-white feline trouble-maker, had a fetish for lingerie. Each time I left the house, he’d dash upstairs to check if I had left the drawer open. If I had, he would stand on his hind legs, pull the drawer open wider, then patiently fish out, one by one, anything he could reach. When I returned home I’d likely see bras, panties, silk nightgowns, and slips strewn up and down the curved stairwell—the focal point for guests who came in the front door.

Smokey had been king of the household for years until we rescued this eight-week-old bundle of trouble. What older cat wouldn’t be upset by the intrusion of a young upstart kitten who immediately began siphoning off the family’s coveted attention? But Single was especially irksome because he was born without good manners.

Single and his siblings, one female and one male, were found in the attic above my husband’s commercial-glass contracting office. After his secretary and bookkeeper kept insisting they heard kitten mews overhead, Jerry and our son David reluctantly climbed up to investigate. During their ascent, Jerry muttered, “We’ve got to give those ladies some time off!”

When they poked their heads into the attic, all was quiet. But when their eyes adjusted to the darkness, they saw three pairs of bright glowing eyes from a corner where the abandoned kittens huddled quietly together. Once the kittens were rescued and brought out into the light, Jerry said it was love at first sight when his eyes locked with Single’s.

“This one’s mine!” he announced.

I wasn’t convinced that we needed another cat, especially this sickly runt of the litter, nor was I happy with its name—Single Strength. When I finally gave in, I questioned the name, but Jerry was adamant.

“We named each kitten after the three types of glass in our business—Crystal, Plate—and this one was named Single Strength because that’s the most fragile glass.

Fortunately, for convenience, we ended up calling him Single. Except for the times when I took full advantage of his full name—”Single Strength Chappell! Get off that counter!”

Our hearts were quickly captured by this rambunctious, inquisitive, risk-oriented creature. Smokey, however, was not impressed. Not even when Single started fetching wadded up paper balls. No matter how far or where they were thrown, he never tired of retrieving them and proudly dropping them at the feet of the thrower—much to the delight of our family and guests.

Smokey disdainfully tolerated this ruffian who had little respect for house rules. He decided it was his duty to monitor his every movement and make certain he followed all rules.

It was true that Smokey had challenged us with his own rebellious moments as a youngster, but he had quickly developed a respect for rules: No jumping on the sofa, no sitting in the chairs unless invited onto one’s lap, no jumping onto the kitchen counter, and definitely no jumping onto the dining room table—which was exactly what Single did one particular afternoon.

I had just entered the room when I saw Single leap into the middle of the table, barely missing the centerpiece. Smokey, dozing on the floor a few feet away, opened his eyes wide in shock and raised his head. He fixed a long hard stare on Single, then looked in my direction as if to ask, “Well, what are you going to do about that?”

“That is no!” I said sharply to Single.

Single had heard the word “no” before, but as he often did, he suddenly developed a case of deafness. I loudly repeated the word—with more authority—expecting immediate obedience. Instead, Single began to bathe himself. Smokey was almost in cardiac arrest.

Swatting him lightly on the behind with the paper, I said sharply “Single, no!”

Finally, in slow motion, Single sauntered across the table and jumped down.

Smokey glared at Single, and then looked at me as if to ask, “That’s it? That’s all you’re going to do?”

As Single strolled past him, Smokey gave me one last inquiring look. Apparently dissatisfied with my disciplinary action, or lack thereof, Smokey suddenly whacked Single on the side of the head with his big paw, bowling him over. Though Single was unscathed, Smokey walked from the room with head and tail high, satisfied at having taken matters into his own paws.

With time, Smokey and Single became close friends, the good traits of each rubbing off onto the other. Single learned to respect rules (for the most part) and Smokey took more risks by chasing birds in the back yard—a first for him. Smokey never fetched, however—he left that to the young upstart.

Fun fact: Cats don’t actually “sharpen” their claws. When they scratch on furniture, they are stripping away worn layers from the claw to reveal a fresh layer.

“Since this is such a beautiful day and it’s Saturday,” Jerry said, reaching for the hairdryer, “Why don’t you fix a picnic lunch while I run a few errands and we can drive up into the mountains? Maybe toss our lines in the lake and catch a few fish for dinner.”

As my husband and I planned our day, our large tuxedo cat, El Gato Gordo, purred softly in my arms, gazing lazily at the lush green trees through our upstairs master bath window.

When Jerry turned on the dryer, Gato bolted in panic. In his hurry to escape, Gato’s claws ripped the soft flesh on the underside of my left lower arm. The cut was deep and bled profusely. After stopping the bleeding and inspecting it closely, we decided no stitches were required. Jerry helped me treat and dress the wound while I insisted no amount of discomfort would interfere with our day’s plans. He left, and I began searching for Gato.

“Gato!” I called—several times—but there was no answer. Since cats are so intelligent and sensitive to human emotions, I wondered if perhaps he felt my shock at being scratched and feared I was unhappy with him.

Finally, I found him huddling beneath the stairwell, wide-eyed and trembling. I picked him up gently, favoring my bandaged arm. As I held Gato close, I felt the wild thumping of his heart. Kissing him on the head I whispered, “It’s okay sweetheart, it was just an accident. I know you didn’t mean to hurt me.” I sat on the stairs holding and stroking him in my lap until he relaxed. Finally satisfied that he was over his trauma, I released him and started preparing for our afternoon outing.

I dashed to the store for some chips and dip, and while waiting in the checkout line I met the husband of a neighbor who lived at the end of our street.

“What happened to your arm?” he asked, noting the bandage.

After I explained, he responded with raised brow, “I tell you one thing, if that had happened to me that would be one dead cat!”

Horrified, I said, “It was an accident! He didn’t deliberately hurt me—he was just frightened.”

“I don’t care whether it was an accident or not, I’d get rid of that cat!”

Several weeks later, the wound was completely healed, but in its place was a prominent white curved scar— almost three inches in length.

Early one morning as Jerry and I sat enjoying our freshly ground vanilla-nut coffee, he glanced at my arm and said, “I’m so sorry, honey. Maybe the scar will fade with time and you won’t even be able to see it.”

I surprised him with my response. “I hope it never goes away! I want to always have this scar—as a reminder.”

“Why on earth would you want to remember that Gato scratched you? Are you mad at him?” he asked, eyes wide. Gato, dozing in the corner, raised his head at hearing his name.

“Of course not!” I responded, blowing Gato a kiss.

Then I related the comments made by our neighbor’s husband and how it got me to thinking.

“Seeing this scar will remind me that, yes, I suffered a minor injury, but it wasn’t about me—it was about Gato and what prompted his action. Gato would never deliberately hurt me. His lashing out at me was a reaction—not a malicious intent—because he was suddenly frightened and felt threatened. People can do the same.”

I refreshed my cup, inhaling its sweet aroma. After adding more half and half with sweetener, I took another bite of my cinnamon roll.

“How so?” Jerry asked, eyeing the last doughnut on the plate.

“Cutting remarks can sometimes be made by those closest to us—someone we trust and feel safe with—and I want to remember that. Shouldn’t a friend be given the same compassionate understanding as a pet? Just as I wouldn’t think of getting rid of Gato because he hurt me, neither should I immediately react by getting rid of a friend.”

Jerry nodded as he yielded to the last doughnut.

“Rather than taking offense,” I continued, “wouldn’t it be better to learn what prompted their out-of-character action? Maybe their response was due to something totally unrelated to us and they simply reacted out of fear, insecurity or pent-up frustration—by lashing out at whoever was the nearest.”

Setting his cup down, Jerry reached for my hand and clasped it gently. “You mean like the other day when everything had gone wrong at the office and I came home and rudely lashed out at you? Oh, I know I later apologized, but it had to have cut you deeply at the time—it was so unlike me,” he said, eyes watering. Releasing my hand, he took my arm and gently caressed the scar. With a boyish grin, he said, “I noticed how you looked at your scar after my inconsiderate comment and I wondered why—after all, it was healed. You never retaliated or lashed back at me in response, but the tears in your eyes said it all. Now I know why.”

That was decades ago and since that time, both Gato and my husband have passed on. But just as I wished, my scar still remains. I thank God that although it has faded, it is still visible. It is an ever-present reminder that validates an old Proverb, “A friend loves at all times.”

And since I am a friend lover as well as a cat lover, it helps me to resist the temptation to kill a friendship over a self-defensive swipe or an unintentional wound.