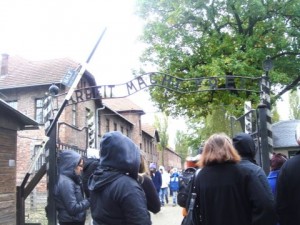 Infamous sign on the entrance to Auschwitz – “Work Leads to Freedom”

Kitty was invited to speak in Poland following the Polish translation and release of her book I Can Forgive if I Want To. After reading Kitty’s book, Poland’s Campus Crusade for Christ Directors, Heniek and Jagoda Markiewicz, invited her to be keynote speaker at their 2009 Women’s’ Forums events . As a result, Kitty spent the month of October that year speaking throughout thirteen Polish cities. Jagoda served as her primary translator, with Gosia Wchalupnik, also a CCFC staff member, serving as secondary translator.

At Kitty’s kickoff speaking event in the capitol city of Warsaw, she was greeted by Magdalena Gryszko, a personal representative sent by Patronatem Minister Elzbiety Radziszewskiej, head of Poland’s State Department. Magdalena read a lengthy letter from the Patronatem Minister welcoming Kitty and officially endorsing her forum speaking events in each city. (An unheard of precedent, according to Jagoda) The letter commended Kitty on her book and in particular her ministry which focused on healing the emotional wounds of victims. 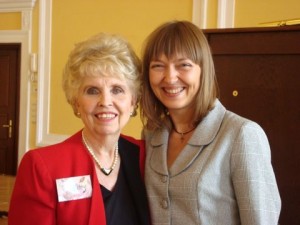 Kitty also was featured guest on seven radio talk shows and interviewed by a number of newspaper and magazine reporters. Other events included speaking to a packed audience of nuns and priests at a Catholic convent in Krakow, and a standing room only large Catholic Church mass in Radom. Kitty and Jagoda were amazed at the conclusion by the Church’s standing ovation and a presentation of roses.

Check out the gallery of pictures from Poland 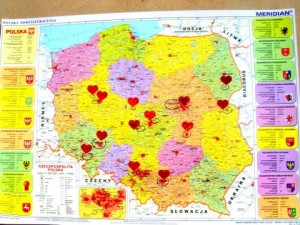 Map of Poland – Hearts designate each city where Kitty spoke

It was obvious that the hearts of the people in Poland were ready for Kitty’s message of forgiveness. Dorotka Laskowski, leader of Women’s Forum in Kolo, evidently expressed the feelings of many of her countrymen when, after greeting Kitty with their traditional hug and kiss on each cheek, she said through tear-filled eyes, “I have been praying for six years that someone would come to Poland with a message about forgiveness. Thank you for being willing to travel such a long way to answer my prayer.”