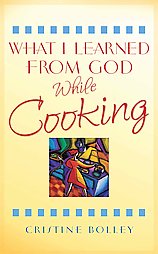 The Great Cornbread Cook-off
by Kitty Chappell
(excerpt below)

For where you have envy and selfish ambition,
there you find disorder and every evil practice.
But the wisdom that comes from heaven is first of
all pure; then peace-loving, considerate . . . full of
mercy and good fruit . . . and sincere.
James 3:16-17 NIV

Wolfing down a third helping of corn bread, my husband Jerry gushed to our hostess, “This corn bread is delicious!” To make matters worse, he turned to me and said, “Isn’t Debbie’s corn bread great?”

Debbie beamed as she said, “Thank you.”

Jerry used to rave about my corn bread until I got on my “health food kick.” I’d been using nothing but “stone-ground whole wheat flour” in every thing, including corn bread. There was no way I could compete with Debbie’s light, fluffy recipe.

Maybe I should compromise.

One afternoon over coffee, I swallowed my pride and asked Debbie for her recipe. (I had thrown mine out.)

“I’m sorry; you know I don’t share my recipes. I don’t understand why you give copies to everyone in the world. Don’t you realize that when you do that, you don’t have anything that’s your ‘specialty’?” she chided. I fumed all the way home.

“Debbie refused to share her corn bread recipe,” I complained. “I just want to make good corn bread for you,” I stammered, tears flowing unexpectedly.

“You used to make great corn bread! You’ll do it again.”

We didn’t have corn bread that often, only when I cooked pinto beans, but I was motivated! After several attempts, Jerry reported, “It’s good, honey, but not quite there yet.”

During my next attempt, I suddenly realized something-I cared more about competing with Debbie than I did in pleasing Jerry. “I’m sorry, Lord,” I whispered.

That day Jerry exclaimed, “You’ve done it-this corn bread is every bit as good as Debbie’s!”

Weeks later, during dinner at Debbie’s, Jerry again praised her corn bread and gave me a sly wink. But this time, it didn’t bother me.

Helping Debbie clean up, I opened the trash compactor to discard something, and there it was-Debbie’s corn bread secret-several empty boxes of Jiffy Corn Muffin Mix. I’ve been competing with a mix? I laughed inwardly and quickly closed the door.

Debbie hadn’t wanted to share her corn bread secret, so the least I could do was help her keep it. I told no one-except Jerry.

Dear Lord, please protect me from the Temptation to compete with others.
Motivate me to want to do my best so that You will be honored.
And help me to realize that the most powerful tool in Your hand is a pure motive.

Delicious with a thick slice of corn bread!

On the side: shredded cheddar cheese and chips

Cooking Tip:
Go to your nearest grocer, purchase Jiffy Corn Muffin Mix, and follow directions. After making corn bread from scratch that equaled Jiffy’s in taste and texture, I decided it was easier and less-time consuming to just buy their mix. (When I receive compliments, however, I always give the credit to Jiffy.)

Published in What I Learned From God While Cooking, Cristine Boley, Barbour Publishers, 2006, (p 67)
Top