Easter is an event that blows my mind! It totally defies human comprehension!

Why would a perfect being like Jesus willingly give his life for imperfect people who could never deserve or repay his sacrifice? A sacrifice involving his dying one of the most agonizing inhumane deaths the mind of man had concocted at that time—death on a cross.

Jesus was not a victim of his circumstances, a mere pawn in life’s game of life and death. He had a choice. He could have avoided the cross by denying who he was—the perfect Son of God who came to earth to rescue sinful man. He could have chosen to listen to The Tempter and establish an unparalleled earthly kingdom. With his powers, the entire world would have gladly fallen at his feet and worshiped him!

Instead, he chose Truth. And the more he proclaimed that truth, the greater the hate for him intensified. His choice and that hate led him straight to the cross.

Had Jesus gone unwillingly, he would have complained bitterly as his beaten body struggled beneath the weight of the roughly hewn cross that would soon feel his last gasping breath. Writhing in pain on that cross, he would have cursed his few lonely followers at the scene for not doing more to rescue him. He would have railed against heaven, demanding destruction for his crucifiers. But he did none of these.

Because Jesus would rather die than spend an eternity without you and me. And—because Jesus really is who he said he is in John 14:6. “I am the Way, the Truth, and the Life. No one comes to the Father except by me.”

As blood poured from his painful wounds, detouring in its slow journey to the ground below only to fill dry crevices in the wood, this is all Jesus asked of heaven.

“Father, forgive them, they don’t know what they are doing.”

Did the world ever see such love? Before or since? Yet, had this unmatched act of love ended at the cross there would be no Easter.

As Jesus suffered the labor pains of dying, suspended between heaven and earth, Easter was still but a promise in history’s womb. While the solders gambled for his garments below in the shadow of the cross, nature cried out its objection to the unfolding scene of injustice. In protest against the worst that man was giving, compared to the best that God was offering, the sun stopped shining. Huge rocks split open in rebellion. The earth shuddered in disgust by forcing graves to give up their choicest dead.

Amazingly, looking beyond this event, the mighty veil in the temple ripped from top to bottom, allowing free access to any heart longing for a personal relationship with the Holiest of Holies.

Even time held its breath, stood still for a moment, then divided forever.

Yet, no matter how great his love nor extreme the earth’s displeasure, Easter would have never happened had that one act alone by Jesus ended on Calvary’s Hill. It was when Jesus conquered death, arose from a grave never meant to hold him, that the gates of heaven opened to eternal life for anyone choosing to enter. It was through his resurrection—the long-awaited promise fulfilled—that Easter was born!

Any businessperson would call Jesus foolish for not requiring a minimum guarantee for such a risky choice he was so determined to carry through. What if his sacrifice was merely a gamble and no one on the earth he created believed in him?

What if he died in vain? 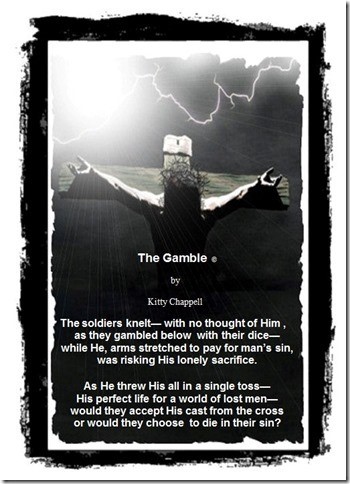