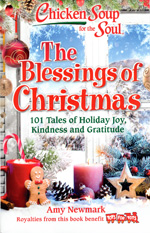 Not Giving Up on Christmas
by Kitty Chappell

Not Giving Up on Christmas

What is Christmas? It is the tenderness of the past, courage for the present, and hope for the future.
~Agnes M. Pahro

As twilight fell, I finished the note in my last Christmas card and placed it on the stack near the packaged gifts that were ready for mailing. I admired the twinkling Christmas tree and sighed with satisfaction. Thanksgiving was only days away, and I was ready for both holidays!

I loved having an entire month to relax and enjoy the Christmas season. It gave me time to prepare my traditional homemade assortment of chocolate nut clusters, fudge, and pecan pralines while enjoying my favorite Christmas CDs.

This had been my routine for over two decades, but things were different now. My house was empty. This was the second Christmas since my husband, Jerry, the love of my life for forty-seven years, had passed away. Our children, busy with their own family traditions, lived in other states.

That first Christmas, I had neither the heart nor energy to decorate and celebrate Christmas. Even spending Christmas with my children wasn’t the same without Jerry. Maybe I was too distracted dealing with the sudden responsibilities of widowhood. One of them required quickly downsizing from our two-story, five-bedroom home to a tiny but adorable, more affordable place. I was resigned to the fact that Christmas would never be the same without Jerry.

Though my heart still ached, I decided sometime during my second year that I could not give up on my favorite season! Maybe the decorations would brighten my spirits. The warm lights, glowing on the tree and many indoor plants, might drive the darkness from the long, empty evenings and make it cozier for my cat and me as we snuggled in our recliner.

After my faithful handyman brought down the decorations from the attic, he staked the larger items into the ground, and I decorated everything I could reach. Keeping to our tradition, all the decorations were up and the lights were ready to go on the Saturday before Thanksgiving.

The only thing left to do was create the sweetest part. But why? What would I do with my traditional twenty-five pounds of homemade candies?

I had loved placing the tasty morsels in baking cups, arranging them in attractive Christmas tins, and giving them to people who had gone out of their way during the year to help us in some way. Special friends and relatives, of course, were always recipients. But here I was in a new neighborhood and had met only a few of my neighbors. Most of them worked during the day. Besides, Jerry wasn’t here to eat his share.

“I know,” I said aloud. “What better way of getting acquainted than by taking neighbors a container of my candies and introducing myself?”

Suddenly, the sweet voices of singing children interrupted my thoughts. After hurrying to the front door, I stepped outside and stood in the shadows beneath my roof overhang to quietly investigate.

About a dozen children stood on the sidewalk facing my brightly lit nativity set that was centered in the front yard. The large, colorful plastic figures, with lights glowing softly on the inside, represented Joseph, Mary, Baby Jesus, three wise men, and a camel. The children’s cherubic faces, eyes wide in wonder, glowed as they sang softly “Silent night, holy night…” I saw no adult and assumed this was a spontaneous act by neighbor children. Moved by their awed expressions, I glanced around the yard, trying to see everything through their eyes.

Every bush bloomed with colored lights. A family of twinkling deer stood by a stream of glittering blue and white lights, simulating a creek. The fawn lowered its head mechanically as though drinking. Across the yard, a white mamma polar bear and her baby nodded their heads in approval. Glistening icicles clung to the eaves of the house as they crawled upward to a huge, brilliant star, the focal point of the gabled roof, and then back down.

When the singing stopped, I stepped out of the shadows, introduced myself and thanked them. “Your singing sounds like angels! Thank you so much!”

We chatted for a few minutes. Some children pointed to their house while others said they were visitors. As I turned to go inside, I regretted that I had nothing to offer them. If only I had made my candies!

Suddenly, I turned and called out, “Stop by after Thanksgiving for some hot chocolate and homemade candies. They will be ready by then.” They all cheered, promising to come.

What began as a simple gesture that year became a popular Christmas tradition, one that quickly expanded to include the parents. To get better acquainted and deepen friendships, I began inviting one family over each evening. Now, even couples without children look forward to coming. Sometimes, it is just one person—a lonely widow, widower, or divorcee. To accommodate more guests, I extended the time until mid-January since my decorations stay up until the last weekend of that month anyway. Many adults who work and are extremely busy before Christmas look forward to a relaxing visit after the rush.

One year, I decided it would be fun to give each child a Christmas mug. The first Christmas that I set out a display of mugs and let the children choose one, I realized I had a winner! They loved the idea of choosing their own mug, knowing they could take it home. I soon realized that adults are still children at heart and also enjoy picking out their mugs. “I still have the one I got here last year, and I love it,” one father commented, eyeing the selection for another.

I only select mugs that are unique and exceptionally attractive. Because I am a thrift-store junkie, I pay very little for each mug. I discovered that if I wait until a day or two before Christmas, some thrift stores mark their mugs down to as little as twenty-five cents each! That way, I can stock up for the next season.

I also appreciate Christmas cards, especially those including handwritten notes. Because my cozy home lacks wall space to display the many I receive, I solved the problem by buying a small Christmas tree with lights at a thrift store. After placing the tree on an end table, I used a hole puncher and ornament hangers to attach each card to the tree. Not only were the cards beautifully displayed, but I created another unique decoration.

When it came time to remove the cards from the tree, I invited the next-door children over for a “Card-Removing Party.” Afterward, I served them ice cream and cookies. They so enjoyed this that I had to promise they could do it again next year. Voilà! Yet, another tradition was born!

It’s hard to believe that fifteen years ago, I almost gave up on Christmas.